We had just spent two weeks in Russia in freezing cold weather and now found ourselves on a plane heading for Bombay, India, and its 100-degree sweltering heat. Now, my partner Bryan and I are no thrill seekers, but what lay ahead of us on this trip could be characterized as nothing less. Our assignment was to document huge numbers of Indians who were becoming Christians… and were being persecuted for their faith.

India grabs your nose the moment you step off the plane, and within minutes mosquitoes were swarming Bryan and I. “Better get some repellent on!” an American living in India warned us. “These are the nasty ones that will give you malaria!” That was typical of India. It seemed you just couldn’t get comfortable. Nothing felt familiar, the food, the weather, the beds & the only reassurance we gave ourselves was “We can endure anything for a couple of weeks.”

We spent a lot of time on trains, crammed like sardines in overcrowded cars filled with the sick and infirmed. Our first assignment was a crusade held out in a huge field in the village of Rajahmundry in Andhra Pradesh State. The sea of humanity that we witnessed was indescribable. An Indian version of Woodstock if you will. Some nights the crowd was estimated at 60,000 people. I was responsible for producing a show that could air later on American TV. Shooting video in this dusty place was a real challenge: power differences, lights for night shooting that were strung on shoestrings and protesters – radical Hindu that were not glad we were there. Little did we know that this would be the best part of the trip.

Our next visit was to Orissa State, a state that is notoriously anti-Christian with a reputation of killing and persecuting Christians. We were to travel to the high mountain village of Badapada where we heard that over 30,000 people had gathered waiting for a crusade to begin.

The day of our departure we received a warning that some were plotting violence against the Christians there. I remember gathering with other Indians and Americans in a hotel room to discuss these accounts and to provide an opportunity for anyone who wanted to back out. There was no way that we were going to back out. Bryan and I had a job to do & we were going to get it done.

After an all night drive on the worst roads on earth, with trucks and cars whizzing by within inches of our van, we arrived at our location tired and exhausted. Needless to say we were a little nervous when we arrived, and for good reason as we learned that the mayor had other ideas. He was an educated radical Hindu and was bent on stopping our activities at all cost.

A lot of preparation had gone into this event by the Christians who were coordinating it, including the erection of a huge tent covering acres that could accommodate 30,000 people. However, when we arrived at the location the first day, orders had gone from the mayor’s office to the police to break up this gathering. When we arrived we learned that the crowd had been badly beaten with batons by the police and many had fled into the hills.

After a day of negotiating with an official on site we left frustrated and tired. However, we did conduct the most difficult interview I’ve ever done. We met the Paul James family, a pastor who had been hacked to death, cut into six pieces in front of his wife and kids just because he was a Christian pastor. It had been less than a year since the incident and at the end of our interview I hugged the family and they asked for prayer. Their 15-year-old son wanted to follow in his daddy’s footsteps and be a pastor, too. That night Bryan and I were scheduled to leave so we grabbed a Jeep and drove all night to the coast to begin our trip out. For our team, things would only get worse.

The next day, our party sent a delegation to the mayor’s office to appeal for help. Our delegation included Indians, an American doctor, a U.S. Special Ambassador on AIDS, and several businessmen. Discussions were cordial and polite, but again our group was lied to.

Our team returned to the crusade site to find an increasingly restless crowd. With no permission to hold a large scale meeting a smaller effort to train pastors in a small building got underway, until late in the afternoon when police showed up with riot gear and arrested our entire team. By now the anxious crowd had re-gathered and wanted the crusade to begin. The police marched our entire team in handcuffs under the large circus-like tent. Then the worst began to happen.

The crowd, many of whom had traveled hundreds of miles, became increasingly angry with the police. Suddenly rocks started flying and soon a full-scale assault on the police was underway. Several of the crowd grabbed a policeman and almost beat him to death. Some of our team jumped up and ran toward the crowd in an effort to restore order with rocks flying toward them. Their efforts worked and almost certainly saved many of the policemen’s lives. Behind them the police began loading their guns. Then the unthinkable happened. The police had crawled into the safety of their armored trucks and through small metal slits pushed their rifles out and started firing into the crowd. When it was over several people had been shot including a 24-year-old deacon of a church who was shot twice in the upper leg. The police dropped him bleeding in front of our team and both of our doctors tried numerous times to treat the man, but the police thrust their batons into our doctors’ stomachs and would not allow them to help. The wounded man laid there for over two hours in the dirt and eventually bled to
death.

That evening our team was thrown into prison on trumped up charges. All alone and not knowing if anyone in the outside world knew our fate, life got real lonely. Eventually, through an amazing set of circumstances, word reached to the US of the false arrests. A short story even appeared on CNN, and in the hometowns of our team it became front-page news. Eventually, the U.S. State Department got involved and a deal was struck. A special American plane was flown in to pick our team up and get them out.

After returning to the comfort of my home, I can’t help but be thankful for the freedoms as Americans we enjoy. “Will you ever go back to India?” friends always ask. “Probably” I normally respond, but I think Bryan and I have had enough thrills for now.

Monkey On My Back

Few cultures I’ve seen are as different from my own in the U.S. And few are as interesting as this nation of almost one billion people.

When videotaping religious sights there’s always a fine line between sensitivity and getting a good shot. I was in the outer area of a Hindu temple filming worshippers, incense, and statues being as non-intrusive as I could. At one point I knelt on the ground to get a nice shot of an older woman burning incense when suddenly I felt sharp claws digging into my back. I let out a yell and jumped up in obvious shock only to see a monkey running away and dozens of Indians laughing.

I always do my best to provide some cross-cultural entertainment.

How Am I Going To Explain This To Your Wife?

The Indian Railroad is the largest employer in the world, and one of the only ways to get around that huge country. India is sometimes hard to describe, incredibly beautiful, wonderfully friendly people, many incredibly poor, and sometimes the sick, afflicted, and deformed leave you feeling sick to your stomach.

My colleague Bryan and I were on our way to film a leper colony, working for an organization which was helping to relieve some of the suffering. In a small way we felt good to be helping some of the problems in the country. Our host was a manager in the Indian Railway system. He had made arrangements with the train engineer to stop the train at an undesignated stop out in the middle of what seemed like nowhere, so we could jump off the train and be a little closer to the leper colony. It seemed like a good plan…

The sun was starting to set when the squeal of metal indicated the train was slowing. “We will be getting off here,” our host mentioned and so we readied our cases of gear and our luggage to disembark. “Bryan, I’ll jump down off the train with our friend Rajeev and you quickly hand the baggage to me.” Well after quickly off-loading about half of our cases, the train started moving. “What!? We’re not unloaded yet!”

“Quick, Bryan, give me the other cases!” At this point the train started moving forward and gaining speed. It was dusk as I continued to jog alongside of the train, tripping over rocks around the tracks and catching cases as they came off. All of a sudden, to my horror I heard Bryan scream, “Steve, the camera!” Here was our $30,000 camera in a soft case falling off the train. My only thought was, “save it!” At that point I dove to cushion its fall and I hit the rocks hard. Looking to my right I saw the grind of steel train wheels on the tracks and felt the brush of steps as they brushed passed my head in ever increasing speed. “Roll, left,” I remember thinking to myself. “Stay low – if one of those steps hits you in the head, it will drag you under the train and you’ll be a goner!”

About the same time an incredible wail of cries went out as the Indian passengers on the train saw what was happening. They were certain I had been dragged under the train to an untimely death. My colleague Bryan did, too. What death is timely? Well, I was fine, a little bruised, a little scuffed up, but fine. “What was I thinking?” I said to myself as I dusted myself off and went ahead to the leper colony. When Bryan finally arrived, I was sipping a Pepsi in the veranda. “I’m so glad you’re alive!” he said, thinking I had been killed. “I’ve spent the last 45 minutes wondering how I was going to explain this to your wife, Nelly.”

Well, you never know where this video work will take you. Sometimes it’s better not to know. 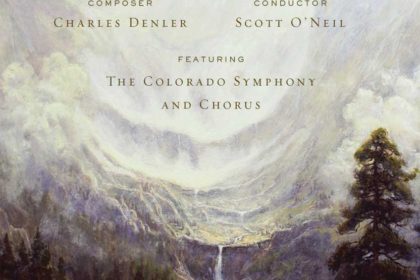 Portraits of Colorado- The Making Of A Modern American Symphony 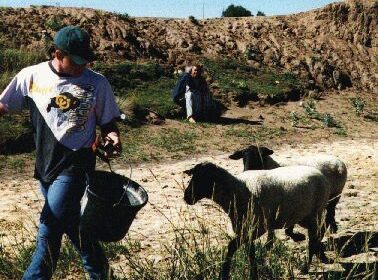 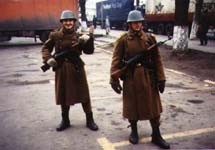