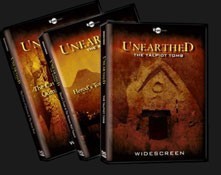 Disk One: THE TALPIOT TOMB Unearthed in 1980, what is now known as the Talpiot Tomb, opened a Pandora's box 27 years after its discovery. A film “The Lost Tomb of Jesus” released by James Cameron and Simcha Jacobovici caused an uproar throughout the world claiming this tomb could be the tomb of Jesus of Nazareth and his family. “Unearthed” takes an objective look at the science used to arrive at this conclusion, and interviews many of the same experts used in “The Lost Tomb of Jesus”. Have they changed their story?

Disk Two: HEROD'S TOMB Unearthed in May 2007, could these shattered remains truly be all that’s left of the legendary king, architect and madman? Known for his astounding feats of architecture, and more infamously for the slaughter of innocent children in the town of Bethlehem, “Unearthed” examines three of the most extreme building projects that have been his legacy. Professor Ehud Netzer has been searching the hollowed out mountain fortress known as the Herodion for more than 30 years looking for the tomb of Herod the Great. Was it all in vain?

WESTERN WALL TUNNELS Unearthed in 1967, the Ministry of Religious Affairs of Israel began the excavations aimed at exposing the continuation of the Western Wall. The excavations lasted almost twenty-years and revealed many previously unknown facts about the history and geography of the Temple Mount. Dr. Dan Bahat, one of the original archaeologists from the Western Wall excavations, tells of the history, excavation and controversies of these amazing tunnels. See arches and architecture from the First Century constructed by King Herod. Walk on the original Roman period streets. See underground parts of the Western Wall not viewable from any modern street level view. The Unearthed team gets a guided underground tour of these fascinating tunnels. What do these discoveries tell us about the ancient historic claim of the Jewish people regarding the Temple Mount?

Disk Three: THE CAVES OF QUMRAN Unearthed between 1947 and 1956 in eleven caves in and around the Wadi Qumran. The texts are of great religious and historical significance, as they are practically the only known surviving Biblical documents written before AD 100. The Dead Sea scrolls comprise roughly 825-872 documents, including texts from the Hebrew Bible. Explore the Qumran area where the scrolls were discovered with Dead Sea Scroll editors, archaeologists and historians. The Scrolls will come to life and answer some tough questions like; was John the Baptist an Essene as some claim? Did he belong to this secret closed sect of Judaism? Recent excavations shed new light on this controversial topic.

THE JESUS BOAT Unearthed in 1986 after a long drought in Israel. Two brothers from the local Kibbutz were exploring along the shores of the Sea of Galilee. To their surprise and excitement, they stumbled upon what has become one of the greatest archaeological discoveries in history—a fully intact First Century Galilean fishing boat. ”Unearthed” will re-visit the initial discovery and excavation of this amazing boat, with archived footage and recent interviews with the two brothers who made the remarkable discovery.