The Search for the Real Mt. Sinai 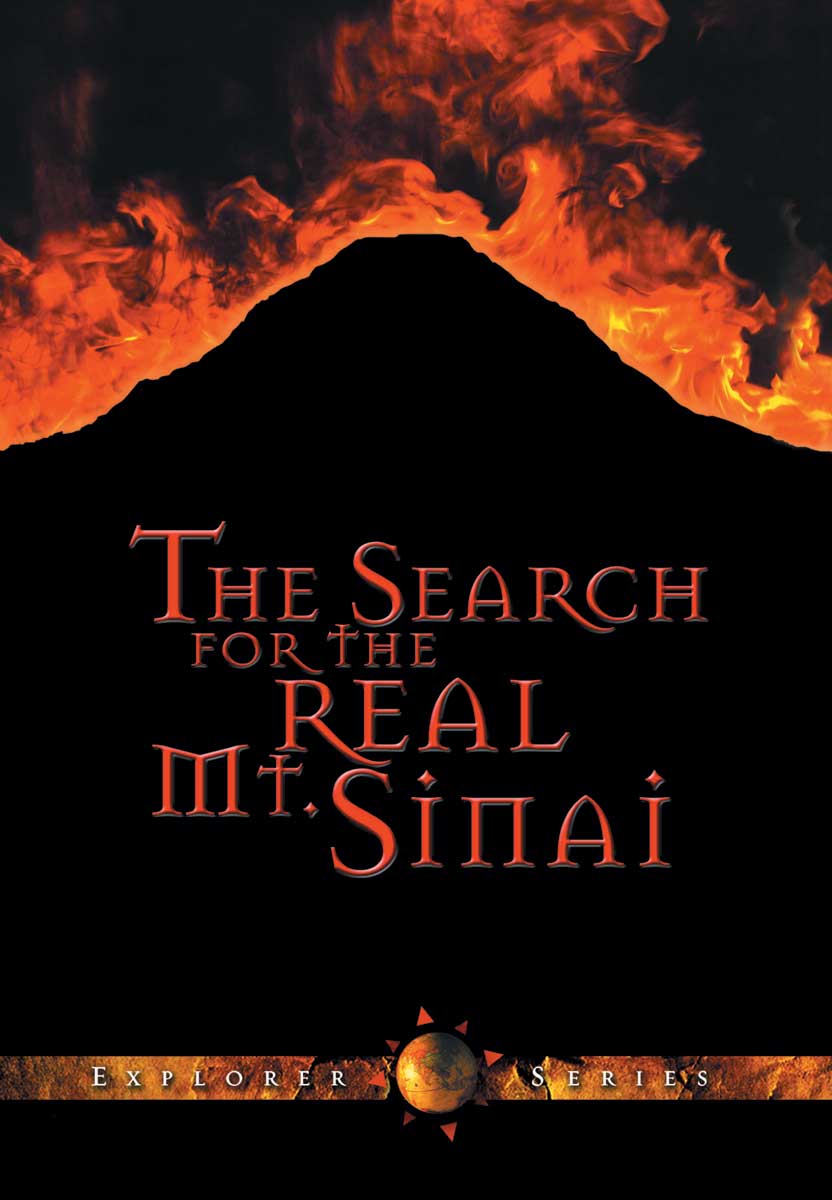 The Search for the Real Mt. Sinai 19
Average rating:

The Search for the Real Mt. Sinai

This is a must purchase, You will not be disappointed ! This is true history from the Bible, see it with your own eyes! 01/19/2017
By Battle Ready
This is a wonderful movie that actually shows the REAL MT. SINAI that matches with the descriptions of the Bible. It is NOT in the Egyptian Peninsula, it's not in current Israel. Scripture over and over says that Mt. Sinai is in the land of Midian, it is "out of Egypt" and according to the Bible in Galatians 4:25, even says that Mt. SInai is in Arabia.

This video shows the burnt black top of the mountain, an altar site at the base, the split rock where the water gushed out to
water the children of Israel, the twelve springs of Elim along with the 70 palms, etc. There is no other site on earth that fits all
of the descriptions of the Bible and you can see it with your own eyes. (Ever wonder why in the maps in your Bible that there are
question marks for some of the locations of the flight from Egypt? Its because they were looking in the wrong places!)
The Search for the Real Mt. Sinai

Wanted to know more 11/01/2018
By Long Time Seeker
This information is ground breaking, at least to me. I found it fascinating and learned new information, but feel there is much more to learn from this credible endeavor. I have never taken biblical text literally which has expanded my search far and wide. I wish our 24/7 news cycles would add more coverage of these on going explorations and discoveries. At the very least I believe there is much we don't know about the inherent meaning of life, but it does make one want to believe...in the power of something greater, an order in our universe and perhaps to understand a glimpse of God's plan...to separate truth from conjecture. There is so much more to uncover and know. This a a realm between strong faith versus not knowing and attempting to attach some empirical evidence to the great mysteries of our origin.
The Search for the Real Mt. Sinai

Mind Blowing Evidence of Real Mt. Sinai! 01/19/2017
By Cheryl Meril
This was an absolutely riveting, mind blowing and awesome DVD exposing the fraud of the traditional Mt. Sinai with an enormous amount of evidence. There should be a threshold of evidence determination by now to come to a conclusion of where the real Mt. Sinai is in Saudi Arabia. After viewing this DVD and other information from Ron Wyatt and the Caldwells, I see no reason why this threshold hasn't been met that it can be stated without question the true location of Exodus has been discovered. Not only that but this is a true witness to the fact God exists! The Saudi's should be shaking in their boots after recovering this site proving God's supernatural feats as stated in Exodus. There's no arguing the evidence whatsoever and people who continue to do so are clearly opposed to God Almighty.
The Search for the Real Mt. Sinai

Figuratively Breathtaking 09/10/2020
By John Neufeldt
After recently and once again beginning to read the Bible from the very first verse to the last verse and with the words about the exodus from Egypt, the journey and time spent near Mt Sinai all still fresh in my mind, I discovered this as a video on Amazon. Watched it and was amazed to see what I'd been reading about. Most amazing of all is the appearance and condition of the rocks and entire rocky top of the real Mt. Sinai. Try to imagine standing among the people who were waiting for Moses to return from the top of Mt Sinai. Try to imagine what it looked like and sounded like while Moses was up there. I can understand why some of the people said it was scary.
The Search for the Real Mt. Sinai

The Real Mt. Sinai 11/13/2018
By David Naff
I have never in my life seen a documentary of this nature. I really believe that this is factual as it lines up with the scripture, 2nd, it makes more sense than anything I have seen in the past, 3rd, the geological as well as other factual information doesn't leave much room for doubt that we have a Creator who knows what He is doing. Great educational information for our schools, and kids as well as us!!! And the people who put this together I believe are people of moral integrity which we really need in this world today. Why would the producer lie? Thank you Mr. Greisen. May God be glorified!!

Two explorers take an incredible expedition into the blistering Arabian Desert and turn up what many scholars believe to be one of the greatest discoveries in history... The real Mt. Sinai, the holy mountain on which Moses received the Ten Commandments.

This program tells their amazing story how they crawl into forbidden military installations, and use night vision goggles to avoid being detected as they pursue their mission and discover over a dozen significant remnants still remaining at the site. The explorers embark on a journey that would change their lives forever... Finding remarkable evidence that confirms the Bible as historically accurate.

THE SEARCH FOR THE REAL MT. SINAI EXCLUSIVE

THE SEARCH FOR THE REAL MT. SINAI - Free Download

And you'll hear about the dramatic and startling discoveries they uncovered when they reached their destination. This 60-minute audio special tells in dramatic detail the incredible expedition to find Mt. Sinai.

The Telly Awards was founded in 1980, to showcase and give recognition to outstanding non-network and cable programs.

About The Narrator - JOHN RHYS-DAVIES

Acclaimed Welsh-born actor John Rhys-Davies is probably best known to film audiences for his roles in the blockbuster hits "Lord of the Rings" series, "Raiders of the Lost Ark" and "Indiana Jones and the Last Crusade." He has also had leading roles in "Coronado", "Victor, Victoria," "The Living Daylights," and "King Solomon's Mine."
Rhys-Davies, who was raised in England, Africa and Wales, credits his early exposure to classic literature for his decision to pursue acting and writing. He later refined his craft at London's renowned Royal Academy of Dramatic Arts.

THE SEARCH FOR THE REAL MT. SINAI : Experts and Scholars Reviews

Excerpts from Pilgrimage and Holy Space in Late Antique Egypt

"Exodus traditions played a central role in Jewish identity in the Greco-Roman period. The mythology of national origins, the distinctive outlines of Jewish ritual and legal practice, and the Jewish liturgy read in the synagogues were all based directly upon the exodus traditions. Jerusalem appropriated the ritual potential of these traditions through the yearly pilgrimage festivals celebrated in the temple. Read more ...

THE SEARCH FOR THE REAL MT. SINAI : What People Are Saying

For centuries now, Bible scholars have been puzzled as to where the real Mount Sinai is located. Most people are unaware of the fact that not one shred of evidence has been discovered to prove that what is called "Mount Sinai" in the Sinai Peninsula is indeed the famed mountain of Exodus. Several proposed sites for the real Mount Sinai have been suggested by biblical scholars, but there is no archaeological evidence to support any of the claims. In fact, the only reason at all that a mountain in the Sinai Peninsula is called "Mount Sinai" is because around 500 A.D., a fortuneteller guessed this to be its location. Tradition is the only evidence that exists. Read more ...

Article: God's Word, Renegade Explorers and The Search for the Real Mt. Sinai

By the late afternoon light of a Saudi sun, Bob Cornuke could barely make out the cinder block walls stained with the sweat of previous prisoners. He had only a scrap of rug to separate him from the dirt floor of this makeshift cell, and he had never felt more alone in his entire life. Just hours ago, he and a friend were, literally, on top of the world-adventurers fresh from a startling discovery that would rock the foundations of biblical archaeology. Now he was a captive of Saudi Arabia's Frontier Forces, swaggering Bedouins with goatees, dark faces, and billowing robes. He was never more convinced of his mortality, and that his destiny now consisted of a few final breaths and an unmarked grave of sand. Read more ...