VALUE PACK: Question of Origins and Countdown to Eternity DVD's 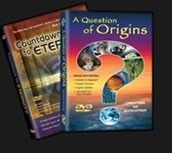 Countdown to Eternity: A fascinating look at the biblical signs of the times which indicate Christ’s Second Coming. Also shows that the Bible has been authenticated through the fulfillment of past prophecy.

A Question of Origins: During the past century, much of the world has accepted the theory of Evolution as fact. Yet the molecules-to-man theory has no direct evidence to support it at all. This film provides overwhelming evidence in favor of Creation. The theory of Evolution has been applied to most scientific fields and this film exposes the blind speculation and evolutionary bias in three areas of science: Cosmology, Chemistry and Biology