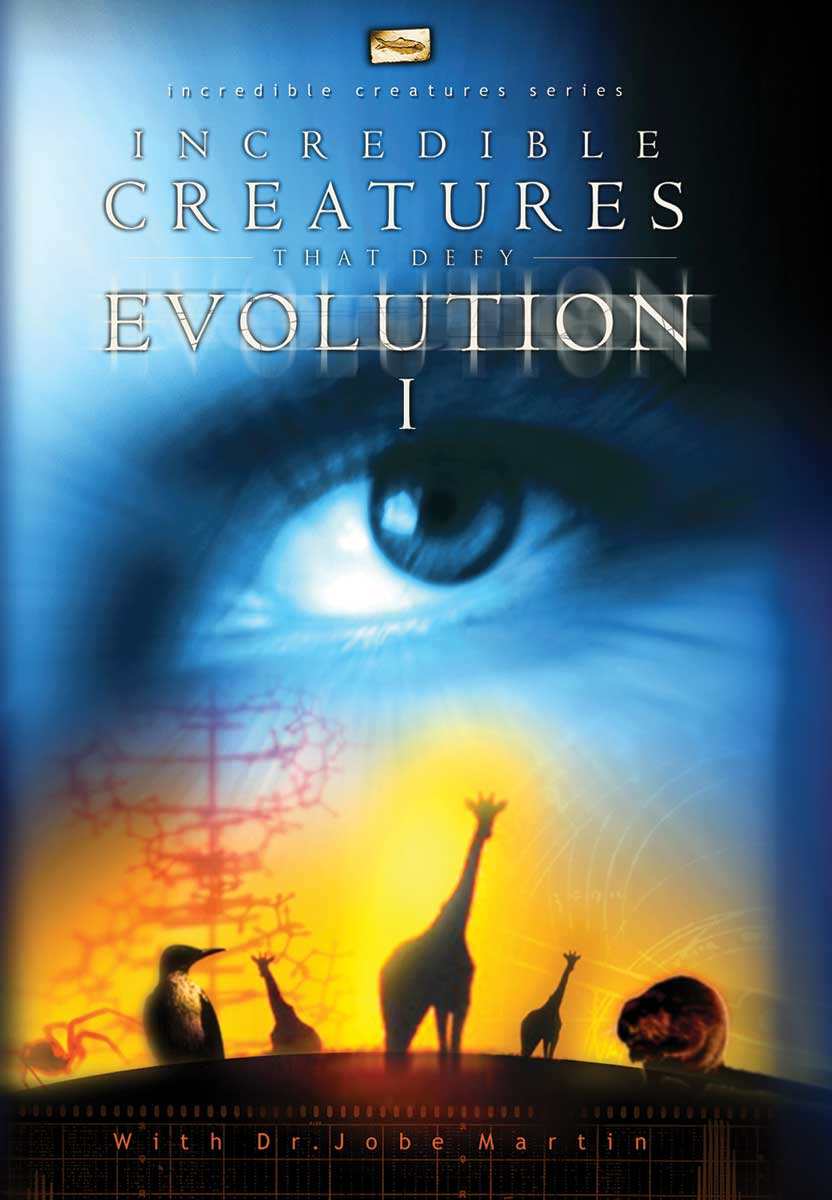 Creatures Of Evolution Series 01/19/2020
By Robert Armstrong
This is a wonderful 3 series video presentation of how evolution fails to answer the incredible variations of animals and their unique capabilities. It is a great series for both children and adults. I highly recommend it for children who are being taught in public schools that evolution is a fact and thoroughly and completely explains how variations in life forms occurred.

It simplifies "Information" as it pertains to animals without getting into the extreme complexity of microbiology and cell formation. I highly recommend this series.
Incredible Creatures That Defy Evolution I - DVD

Fantastic!! 01/19/2017
By Christopher Schwinger
I heard Dr. Jobe Martin, the biologist who explains these fascinating creatures, speak sometime in the last 10 years, and more recently came across the Incredible Creatures series (though it was probably available when I heard him speak). If you are a solid believer in God, or if you aren't, the 3-disc Incredible Creatures series is equally valuable for all people who are open to the idea.

I will use just three examples here of why the Incredible Creatures series is so great. (These examples actually come from discs 2 and 3. I'm only slightly modifying my review of the 3-disc set for Amazon's Disc 1 page.) 1) The Pacific golden plover knows, without demonstration, how to fly 88 hours from the Arctic to Hawaii. It has to be accurate and not mess up by even a degree, or it will die. Thus this skill couldn't evolve by trial and error, because it has to be gotten right the first time! 2) The mussel's means of reproduction is for its larvae to imitate a fish's bait, so that the larvae will
Incredible Creatures That Defy Evolution I - DVD

Reason, Logic, and Understanding are not dead! 01/19/2017
By Deep Magic
What a wonderful scientific documentary. The film includes not only biology, anatomy, and physiology, but also physics, chemistry, and geology. The film presents difficult concepts in an engaging way with simple, clear language that my 10 & 12 year old thoroughly enjoyed (as did the adults in the room). The cinematography, sound-effects, diagrams/images, scripting, and presentation are outstanding. Dr. Martin is highly engaging. I guarantee your kids will understand and be interested.
Incredible Creatures That Defy Evolution I - DVD

Incredible Creatures 10/21/2018
By Lylah Saunier
An absolutely amazing film!
A must see for everyone, especially those who may have doubts about our amazing Lord and Creator.
I highly recommend it to everyone!
Incredible Creatures That Defy Evolution I - DVD

Incredible !!! 01/19/2017
By Carlow B Shepherd
These creatures of creation will astound you with the uniqueness. My whole family watch it over and over again and again.

The Incredible Creatures That Defy Evolution Series enters the fascinating world of animals to reveal sophisticated and complex designs that shake the traditional foundations of evolutionary theory.

This series features Dr. Jobe Martin, who for the past 20 years, has been exploring evolution vs. creation. His findings have been fascinating students around the world as he lectures on these remarkable animal designs that cannot be explained by traditional evolution.

Dr. Martin himself was a traditional evolutionist, but his medical and scientific training would go through an evolution, rather a revolution when he began to study animals that challenged the scientific assumptions of his education. This was the beginning of the evolution of a creationist.

- Are there really creatures that produce fire to defend themselves?

- How does a giraffe get a drink without causing lethal blood pressure to his brain?

- How can Geckos walk upside down, even on glass and not fall?